Jabs, punchlines will fly with 'Zan vs. Zany' 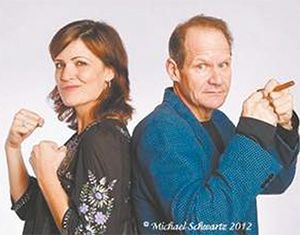 "Zan vs. Zany," a bare-knuckle brouhaha that will hit you in the funnybone at Harveys Improv through Sunday.
Give Bob Zany credit for one thing: he keeps reinventing himself.

He was last at Harveys Tahoe Improv just as the Mayan calendar had predicted the end of the planet. That didn't happen but the next best thing was Bob Zany appearing up here.

Actually, the Mayans were kind of close because every Tuesday Bob can be heard on my morning radio show — "Howie's Morning Rush" on KRLT 93-9 The Lake — with "The Zany Report." Bob offers commentary based on current events. He always ends his segment with his patented tag, "Bay-bee!"

Getting back to reinventing himself, Zany has put together a very funny show, with relative newcomer comedienne Zan Aufderheide from the Midwest, titled "Zan vs. Zany." It's more than just a "He Said, She Said" show; rather a generational comedy performance. A lot of it is improvisational and includes the audience, too.

That's what I mean about Bob reinventing himself. He's very funny, true, but he knows that incorporating others into his circle not only helps new comedians but expands Zany's expanding influence in the comedy business. Bob has produced numerous comedy shows breaking in then-unknown acts such as Garry Shandling, Yakov Smirnoff, Robert Wuhl, Kevin Nealon and Nia Peeples to name but a few. I've always had respect for established comedians giving newer comics a chance to shine and get exposure in the business. Good karma, Bob. 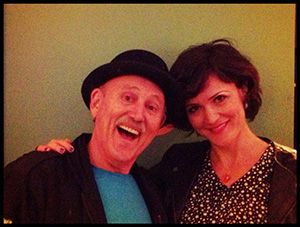 Bob has a philosophical attitude when it comes to the comedy business. "What makes people laugh hasn't changed in the past 30 years. That and it's something I've always wanted to do." A lot of his experience regarding comedy has been documented in a fascinating DVD documentary called "Close But No Cigar" that chronicles Bob's ups and downs in the comedy business. It's pretty blunt and straight-forward. Just like Bob.

Zany's many credits include being on "The Tonight Show with Jay Leno," 17 years as part of the annual Jerry Lewis Muscular Dystrophy Telethon and has made appearances on Comedy Central. On the big screen you've seen Zany in "I am Comic," "Joe Dirt" starring with David Spade, "Up Your Alley" opposite Linda Blair and playing a lawyer in Matt Damon's "The Informant!"

His latest movie, "23 Minutes to Sunrise" directed by Jay Kanzler and starring Eric Roberts and Nia Peeples, has a release date this year.

With "Zan vs. Zany" I think Bob has really hit paydirt. Expect a long run in Las Vegas and also a television show based on their comedy show of the same name.

Action figure name Zan
It's funny, but looking back, the only thing I knew about Zan Aufderheide (and yes, it took me forever to learn how to pronounce her name. Her last name) was through Bob Zany. It was Bob who first introduced me to her via the radio and so every Thursday morning I've had "A Moment of Zan" on my morning show for almost four months now. Before she joined with Bob for their "Zan vs. Zany" show, Zan Aufderheide (I can barely spell it, let alone pronounce it. Her last name) was a headlining comic primarily known in the Midwest.

She was already making inroads on both coasts making a name for herself before Bob intervened.

A Midwesterner who calls Indiana home, Zan has a down-to-earth quality about her that garnered a nice little following just from her chats on the air every Thursday. Now that she was showcased at venues in L.A., New York City and, most recently, Las Vegas, I've joked with her that I hope she doesn't lose that Midwestern mentality, a charm about her that makes her so sweet. Now that I think about it, this show could have easily been called "The Sweet & Sour Show," "A Gen-Xer Meets A Boomer" or "The Optimist & The Pessimist."

Zan has paid her dues (and is still paying them by working with Zany) doing clubs from hell on the road, resorts that have comedy shows but shouldn't, corporate engagements (most good, some not) and yes, even churches.

Not surprisingly, Zan has done very well at church-sponsored events in part because her act is clean and very relatable to people across the demographic spectrum. That doesn't mean she's not capable of some pretty biting zingers but let's just say Zan holds her own very well.

I'm guessing that's what Zany saw in Zan when he first started seeing her perform, which means you can add talent agent to Bob's growing repertoire of credits.

Zan Aufderheide is on a roll.

Although she's still unknown in most cities, she says she feels like a rock star because making people laugh is thrilling whether you're an A-list comedian who can pack an arena or an up-and-coming comic on the road.

She's paying her dues and honing her act, grooming herself for bigger crowds in bigger cities and for the dream job she hopes to one day land: talk-show host.

"People are so cool on the road," Aufderheide says. "A lot of the jokes I'm making are on-the-road jokes - my encounters from one person to the next."

Take, for example, the story she likes to tell about an especially tactless woman at a New York City comedy club who said, "Some people are going to tell you you're too pretty to do comedy, but you're not."

Or the city manager of a small town in Ohio who, after Aufderheide's show, washed out the coffee mug he was drinking from and handed it to her as a parting gift.

"He was a righteous dude," Aufderheide says. "The mug had a map of the town on it."

A former Sarasota massage therapist, Aufderheide got her start in comedy four-and-a-half years ago when she and a group of friends took a series of comedy classes at McCurdy's Comedy Theatre.

Before the session was through, Aufderheide, who studied theater in college, knew what her next career move would be.

"I was bored, bored, bored," she says of her life before comedy. "I thought about jumping out of an airplane, but that was too expensive. I thought about riding a rollercoaster, but that would give me motion sickness. When I threw down my tip money (for comedy classes) at McCurdy's, I knew what I was doing for the rest of my life."

A year later, she won a radio contest sponsored by Joy FM that landed her a spot on tour with comedian Chonda Pierce, a Christian comedienne billed as the "Queen of Clean."

Since then, Aufderheide has gone on to develop the autobiographical one-woman show, "Welcome to Zanland," which she'll perform next week at Home Resource in the Rosemary District.

A collection of tales from her childhood mixed with fodder from the road, the show is part storytelling monologue, part stand-up routine.

"I'm trying not to do anything too fast," Aufderheide says. "It takes time. I've never been involved in anything that's as process-orientated as comedy. There's no place to get better than on the stage."
Like all the good comedians, she's ambitious, hustling to stay busy so her name stays on people's tongues.

On the day she gave this interview, she booked 10 gigs in South Dakota, Pennsylvania, Illinois, Michigan and Minnesota, and was waiting to hear back from producers regarding a televised comedy club show in Fort Wayne, Ind.

Three days later, she sent an email confirming the TV job, as well as a West Virginia radio segment on dating.

"We're gonna make it a weekly thing," she wrote. "‘Keeper or Creeper with Zan.' Should be fun!"

WHAT'S IN A NAME?

Zan Aufderheide's real name is a mouthful: Alexandra Aufderheide.
As a child, her bother couldn't pronounce Alexandra, so he called his sister "Zan." The nickname stuck.

"The supportive Fringe Festival community, including artists and audiences, was a big draw for Zan Aufderheide. Although she was raised in Indianapolis, the stand-up comedian had lived a nomadic life for more than a decade. When she visited last year and learned about the opportunities with IndyFringe, she decided it was time to come home.

"I was living in Los Angeles, and there it's hard to get more stage time than seven to 10 minutes a pop," Aufderheide said. "In Indianapolis, I've been able to grow my act to a full hour."

Her one-woman show, "Welcome to Zanland," was written with this year's Fringe Festival in mind. It's an autobiographical "live documentary" about growing up in Indianapolis and dealing with a dysfunctional family.

"The Fringe show is everything I've wanted to create for a long time," she said. "That's really bolstered my career, because now I have a product that can go out to other markets.""